Recent advances in medical technology have facilitated a variety of practical applications for femtosecond lasers. These developments have been especially remarkable in the ophthalmology field. This is what we will explore in detail in this article. 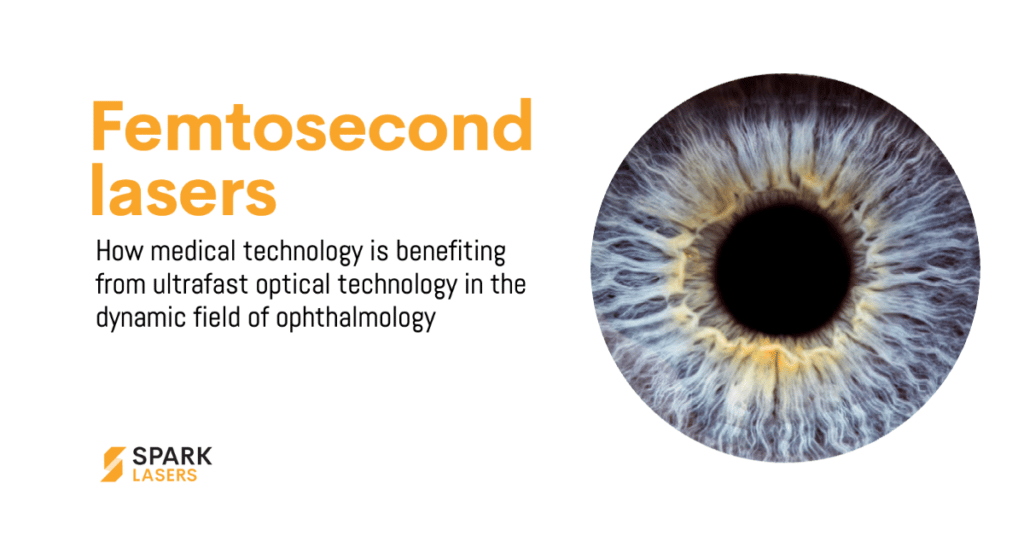 A brief history of femtosecond lasers

The principles underlying this technology were first established in the 1980s, although it wasn’t until a decade later that ultrafast lasers began to be developed for ophthalmic purposes.

In the early 1990s, researchers at the University of Michigan started to explore the applications of ultrafast lasers in healthcare settings.

The research premise was that this laser technology could represent a significant improvement over the existing one (Continuous Wave lasers), which had been in use since the 1960s. CW lasers emit a steady and uninterrupted heat output, whereas ultrafast lasers deliver short pulses of light.

Pulse duration has become shorter over time thanks to technological developments. Early ultrafast lasers delivered light pulses measured in microseconds, but currently, pulse duration is on the femtosecond range – hence the name of these lasers.

Researchers at the University of Michigan hypothesized that at this level of precision, ultrafast lasers could be extremely effective when processing materials. This was confirmed by their findings, which demonstrated that short and fast pulses of light could disrupt eye tissue while causing minimal damage.

This set the basis for the refinement of ultrafast laser technology applications in various ophthalmic procedures, which we will describe next.

How is femtosecond laser technology used in modern ophtalmology?

One of the key characteristics of femtosecond lasers is their non linear interaction with cell tissues and their high wattage – low heat output (under 500 milliwatts). These characteristics make them particularly useful when performing cold ablations, since low heat levels help prevent tissue damage and reduce the risk of scarring.

As for cataract surgery itself, femtosecond lasers have been in use since 2008, and received FDA approval two years later. Currently, femtosecond-laser-assisted cataract surgery is also indicated in pediatric settings. This technology overcomes one of the main limitations of phacoemulsification, i.e. high energy delivery and the subsequent risk of endothelial cell damage.

Another advantage of femtosecond laser technology is high incision precision during the correction of corneal astigmatism that takes place during cataract surgery. The literature suggests that these lasers can provide better long-term outcomes than toric IOLs.

In addition, there are studies that confirm its efficacy treating mild and moderate cases of chronic central serous chorioretinopathy (CSC), a condition that can cause retinal detachment and vision loss if untreated.

It appears that the next step for ultrafast laser technology would be its application to the surgical treatment of glaucoma, and to surgical procedures involving the anterior segment, including retinal surgery. The efficacy of these applications is still being investigated.

Ultrafast laser technology has resulted in significant improvements in laser-assisted refractive surgery. The most common complications of conventional microkeratome-assisted LASIK surgery are flap defects and dry eye, but several studies attest to a reduction in these post-operative complications where ultrafast lasers are used.

Specifically, better outcomes have been reported in terms of flap accuracy, predictability, and speed of post-operative visual acuity recovery, as well as improved flap stability.

According to the literature, post-LASIK dry eye complications appear to be less frequent in laser-assisted procedures, possibly because ultrafast lasers cause less nerve damage than microkeratomes.

Ultrafast laser technology also has applications in imaging and diagnostics. For example, optical coherence tomography (OCT) is commonly used to obtain cross-sectional retinal images and to detect abnormalities in retinal thickness, which could be indicative of conditions like diabetic eye disease, age-related macular degeneration, glaucoma, and central serous retinopathy.

The application of laser technology has given rise to what is now known as ultrahigh-resolution optical coherence tomography. Laser-assisted technology delivers superior image resolution results than conventional OCT tools (2-3μm vs 10-15μm respectively). Higher resolution is achieved while maintaining the non-invasive nature of this imaging technique, with the added advantage of permitting in vivo cross-sectional imaging, which isn’t possible using conventional methods.

Similarly, ultrafast laser technology has marked a before and after in the field of non-invasive biomarker detection. The advantages of using imaging devices that rely on this technology include sub-micron resolution, 3D morphological imaging, faster diagnostics, and no scarring.

Femtosecond lasers are one of the most relevant advances in medical technology. In ophthalmic settings, these ultrafast lasers have brought about significant improvements to the outcomes of refractive and non-refractive surgical interventions, and also have a variety of imaging and diagnostic applications.

In the ophthalmology field, ultrafast laser technology has proven its ability to deliver better clinical outcomes and help preserve healthy tissue while reducing the likelihood of complications related to conventional laser procedures.

Looking ahead, it’s reasonable to expect that ultrafast technology will continue to evolve and deliver considerable innovations in medical and industrial settings. To learn more about the possibilities afforded by femtosecond laser technology, we invite you to contact Spark Lasers.